Master of Science in Gerontology?

The entire program can be completed either in person, online, or a hybrid of both. In other words, you don't have to come to campus to earn your MS in Gerontology. And now for online students, our programs are residency tuition neutral! Online out-of-state students pay the same as in-state students.

You can complete the program at your own pace as either a full-time or part-time student.

Most courses are offered in the evenings to accomodate our students who need this extra flexibility due to family, work, or life.

Master's students can customize their program of study with specialty areas that are relevant to their career goals.

Our students have such a wide diversity of educational training and work and personal experience which makes for rich and dynamic learning.

VCU Gerontology has a strong positive relationship with the wider community, which provides students many opportunities for networking, learning, engaging, and applying knowledge and skills acquired from courses.

VCU Gerontology has a strong commitment to viewing aging as a lifespan journey toward elderhood, with a focus on disrupting ageism where we can.

Our students get jobs! 100% of our students are employed following graduation.

What Our Students Say About Us 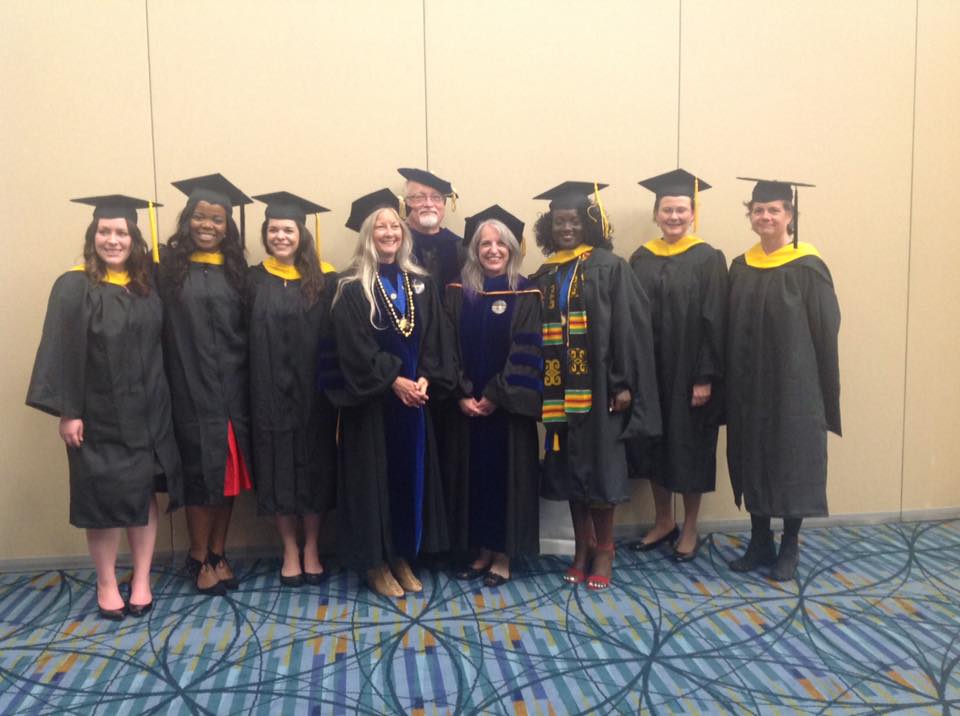 “I have worked in aging services for close to a decade.  I knew some of the material covered in the program would be things I am aware of, have practiced, and understand. In my first two semesters, I have already learned so much more than I had ever envisioned. My knowledge of the aging process has been enhanced and my curiosity and passion for learning has been piqued.”   -Emily Daidone (current MS student)

Richmond, VA - The Department of Gerontology in Virginia Commonwealth University's School of Allied Health Professions became one of only 11 programs nationally to receive academic accreditation for its Assisted Living Administration Specialty Area from the leading organization in the country at a ceremony on November 11, 2016.

The NAB offered the recognition at their mid-year meeting in Atlanta, following a two-year process. The accreditation makes VCU Gerontology the only NAB accredited program in Virginia, and the first-ever accredited program in Assisted Living Administration. The NAB is the nation's leading authority on licensing, credentialing, and regulating administrators of organizations along the continuum of long term care.

"Our mission is to foster a community of Gerontologists who will bring new ideas and cultural change around aging across the spectrum of academia, public policy, and practice," said Department Chair Dr. E. Ayn Welleford. "We are enormously proud to be the first Assisted Living Administration program to receive this accreditation, and we thank the NAB for their vote of confidence in our work."

VCU Gerontology, which marked its 40th anniversary in April, has acquired a reputation as a department committed to the university's overall mission to serve the community at large. The accreditation journey began in 2014, led by Co-Program Director of the Assisted Living Administration Specialty Area Jennifer Pryor. She and VCU Gerontology Professor Jennifer Inker appeared before the NAB governing board at their mid-year meeting before the final vote.

"This accreditation has opened VCU Gerontology's door to students across the country who want to become licensed assisted living administrators, by providing them a quality educational experience that has been endorsed by those who create the national standards," Pryor said. "This recognition also encourages those pursuing this career to receive a foundation in Gerontology - a field that continues to change the world a little bit each day." 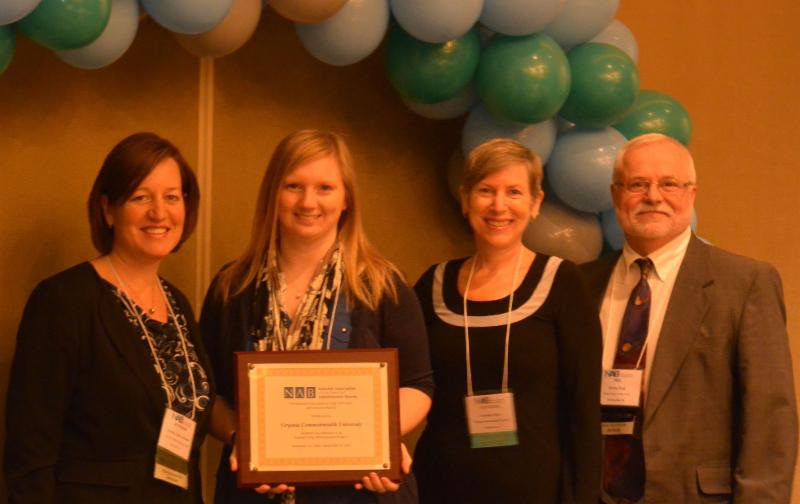 The Department of Gerontology serves the people of the commonwealth of Virginia and the nation by providing educational programs related to the understanding of aging and promoting optimal aging. The department encourages education through discovery of new knowledge, interdisciplinary interaction, professional behavior and service to the aging network. The department’s primary focus is to prepare individuals for positions in the network of aging services. These gerontologists are educated to serve as supporters of optimal aging for older persons and families and caregivers. The master’s program provides quality education leading to careers as services providers, educators and researchers. The department’s assisted living administration specialty area is NAB-accredited and will prepare students who seek licensure as an assisted living administrator. The department also provides assistance and services to the community and engages in research and scholarly activities related to gerontology.

All admissions requirements can be found in the VCU Graduate Bulletin

To apply for our program, please visit the VCU Graduate School website

Curriculum requirements can be found in the VCU Graduate Bulletin

*The course list is not exhaustive of all topics that may be offered in the Department of Gerontology.

Connect Gerontological Theory to Practice: Students will demonstrate a holistic theoretical understanding of adult development and elderhood from a biological, psychological, and social perspective and the ability to apply this knowledge to aging, using a strengths-based lifespan orientation.

Integrate Diversity, Equity and Inclusion in Gerontological Practice: Students will demonstrate knowledge of how discrimination, oppression and marginalization based on age and intersectional identities impacts health and longevity.  Students will be equipped with the knowledge to shape positive attitudes about aging and elderhood.

Develop Critical Thinking and Problem Solving: Students will demonstrate the ability to apply critical thinking and problem solving using gerontological research to evaluate best-practice approaches and the effectiveness of policies and services that support elders, their family members, and the community.

Identify and Respond to Community Need: Students will demonstrate knowledge of Older Adult Services and will be able to make contributions to community identified needs through the successful delivery of services and effective communication with elders, their families, the community, and the public. Community engagement will take the form of field work, research, grant writing, experiential learning opportunities, education and training.

All MS students are eligible to receive scholarships and are invited to apply each August. Scholarships are awarded by a faculty committee based on each student's application, academic achievement, and need.

William and Patricia Wilkerson generously fund this scholarship to ensure that more recent undergraduates who demonstrate exemplary academic skills have access to Gerontological scholarship and its practical application in aging services.

Dr. J. James Cotter endowed this scholarship for students studying elder leisure in honor of the memory of his mother and in recognition of her love of travel, recreation, leisure, and overall personification of optimal aging.

The Theresa A. Thomas Memorial Foundation was established nearly 30 years ago by the late George Thomas to honor his wife, who was a nurse. Upon his death in 1975, Thomas left virtually his entire estate to the Foundation, with the hope that the money would make a difference in many aspects of healthcare. The Theresa Thomas Health Professional Scholarships were established as a means of carrying out Mr. George D. Thomas' desire to promote and develop medical specialists, and education for medical practitioners who plan to practice family medicine in rural Virginia. (No plaque presented)

An annual award is made to a student who demonstrates by virtue of high scholastic achievement and professional competence unusual promise and ability in the field of Gerontology.

The Department of Gerontology has established the Cathy Saunders Career Gerontologist Award in order to honor her tremendous commitment to the field, and her generous donations to the Department and School of Allied Health Professions. Ms. Sauders also considers this donation as a challenge and leadership effort to encourage other alumni to provide support. This award was created as a scholarship fund to promote student enrollment among career gerontologists. As the only realtor in the Richmond area who is also a gerontologist, and her exemplary career as such, she has continued to promote gerontology related issues in the real estate community through assisting other realtors who are working with persons with Alzheimer's Disease, and referring realtors to gerontology related community resources.

Gerontology Student of the Year

Each year the faculty chooses a graduating student who has exhibited outstanding scholastic achievement and demonstrated service in Gerontology.

The Guy M. Kinman, Jr. scholarship is awarded to a Master of Science in Gerontology student who endeavors to study diversity and aging. The scholarship was created in honor of Mr. Kinman, a pioneer in LGBT advocacy, continuing up to and beyond his 100th birthday, December 23, 2017.

The Age Wave Scholar Award is awarded to a Master of Science in Gerontology student who has accepted an Age Wave Scholar position and who has shown exemplary service and partnership to further the mission of the Greater Richmond Age Wave Coalition to make the Richmond region a great place for all people to grow older.

Who is eligible for membership in SPO?
Membership is open to undergraduate and graduate students who are majoring or minoring in gerontology/aging studies and related fields, and who are in at least their second term (or second semester) of enrollment. Undergraduates must have a grade point average of at least 3.3 on a 4.0 scale, and graduate students must have at least 3.5 GPA to be eligible for membership. Faculty, alumni, professional, and honorary memberships are also available.

How do I join SPO?
For an application and more information about joining the Society through affiliation with VCU (Epsilon chapter) contact Dr. E. Ayn Welleford. New members receive a certificate with their name and the name of their chapter and university, a lapel pin, a subscription to the Sigma Phi Omega Newsletter, and an invitation to participate in the national meeting and all activities of the Society.

What are the membership dues?
The fee for first year membership is $30.00 (covers society pin and certificate and administration costs) and annual renewal in $15.00. Dues for the Society are tax deductible. To apply fill out the application and email it to Dr. Tracey Gendron.‌

Now that you know something about us, we would LOVE to talk to you! All prospective and current students are encouraged to reach out to us if you have any questions about our program, courses, and projects.